Cup Stacking – All You Need to Know It is our distinct pleasure to introduce to you the gym class activity sweeping the nation: cup stacking!  We love this sport because it is entertaining and accessible to literally everyone.

Cup stacking engages girls and boys, from our very young all stars (U6 league) to a 60+ senior division.  It also provides inclusion for our special needs all stars and those with autism.

You can choose to buy Speed Stacking cups and official gear or just use plastic cups leftover from your last picnic.  Speed stacking videos demonstrate how to improve hand-eye coordination.  Plenty of social clubs and PE teachers are recognizing the potential of this sport.

Grab a set and some friends or parents to practice with, and before long, your junior all-star is ready to go for the cup stacking world record!  (currently 4.813s by William Orrell for the Individual Male cycle, this kid has skills)

Is Cup Stacking a Sport?

According to dictionary.com, a sport is “an athletic activity requiring
physical prowess and often of a competitive nature”.

By this definition, cup stacking is a sport without a doubt.  The World Stacking Association (WSSA), has published a detailed rulebook to make sport stacking records and events official.

Some sport stacking kids have even emerged with a certain celebrity status online, such as William Orwell, Josh Hainsel, William Polly and Si Eun Kim. The prodigy Chan Keng Ian burst on the scene at age 8 and Mr. Stacking Dude, on the autism spectrum, stars on his own YouTube channel.

There is also a national rivalry emerging as top teams from the USA compete with contenders from Taiwan and Korea for world records.  The 2017 WSSA World Sport Stacking Championships is being held in Taiwan, on April 15-16.  Sport stacking will also be featured for the 6th time at this summer’s AAU Junior Olympic Games.

Wayne Godinet invented the sport of cup stacking in 1981 as a way to entertain and engage kids.  The activity caught on immediately with the kids, especially the ones who had less success with traditional sports.

He said, “This was a sport that leveled the playing field.”  The sport appeared on The Tonight Show in 1990 but really took shape with the 1998 founding of Speed Stacks Inc.

The owners of this company also founded the WSSA to standardize rules, and conveniently made their cups and products the only official equipment.  Therefore, if you want to do it right, you’re going to be spending a little extra for the sanctioned Speed Stacks cups, mat and timer.

Jeremi Mattern tackled this tricky conflict of interest in his 2013 documentary “Stacker”.  Of course, if your kid wants to explore the sport with less spending, plastic cups and knock-off cup stacking sets will get them off the ground. 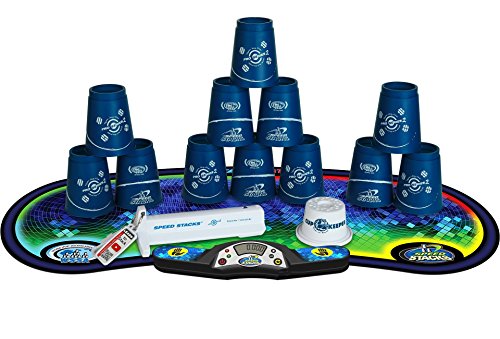 In tournaments, the essential equipment consists of StackMat, 12 Speed Stacks cups, and a Gen Timer.

The Speed Stacks cups, timer and mat can be purchased separately on Amazon, Target, or Walmart.  However, it saves money to get a bundle.  You can also bulk buy a bundle of 3 sport stacking sets at a time for your youth group or PE program, or as many as 30 sets with the Sports Stack Jumbo Pack.

The sport stacking cups and mats come in many different styles, from plain to very flashy.  The basic styles happens to be the least expensive, but some kids enjoy collecting and trading cool stacking cups.  The knock-off set mentioned above costs half the price on Amazon.  Official cups have an advantage over plastic disposable cups because they have a heavier plastic, more durability, and holes for coming apart more easily.  Most sets come with a plastic carrying stem as well as online instruction manuals.

We have referenced the official rule book from the WSSA for Speed Stacks instructions, and will do our best to condense the official cup stacking rules here.  There is an officially sanctioned cup, mat and timer, all produced by Speed Stacks.

The 10 stack has 4 levels; 1+2+3+4 = 10.  Up stacking refers to building the pyramid.  Down stacking refers to collapsing the stack with a cup in each hand.  Each stack in a sequence must be completely up stacked before it can be down stacked.  The timer starts and ends when the palm of both hands are placed upon it.  And fumbling a cup will disqualify that time!

Official sport stacking rules describe events with three sequences.  First, the competitors stack 3-3-3 by making 3 stacks of 3 each from left to right or right to left.  The stacks must then by down stacked into 3 stacks in the same order.  This is the fastest sequence.

The challenging finish requires the 1-10-1 to be down stacked into 3 stacks of 3, 6, and 3.  The categories of male, female and combined compete for the fastest of these three sequences as Individuals, Doubles and Relay.  Some tournaments include fun side-by-side child/parent doubles. 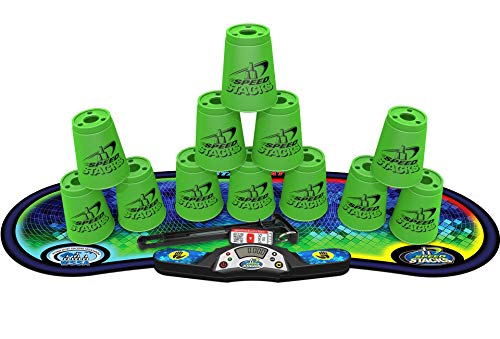 How to Cup Stack for Beginners

Once your kids come across this addictive game in PE or on TV, they will be begging to give it a try.

The numerous benefits make it worth the spending.  Hand-eye coordination increased 30% in one study.

The sport also encourages a great community and sportsmanship, with players supporting each other as they try for their personal best.  Thousands of recreational cup stacking clubs near me have registered with WSSA’s ClubHub, so it’s easy to find a group in a major city, or just have a family competition.

As the sport gains popularity, Speed Stacks may become a top birthday or Christmas gift for middle school kids and future Stack Stars in 2019.

I'm a sports fanatic and father. I love sharing my love of sports with kids because I truly believe that sports impacts the lives of kids like nothing else. Youth Ultimate Frisbee Could Be the Next Big Thing Kids Fishing Poles for a Summer to Remember

This site uses Akismet to reduce spam. Learn how your comment data is processed.